When S53P4 bioactive glass is implanted in a septic bone defect it will exchange alkali from the glass surface with the hydronium in the surrounding microenvironment, which will increase the local pH. The release of ions of the glass surface will also increase the osmotic pressure locally. A silica gel layer will be formed near the glass surface to which amorphous calcium phosphate precipitates and subsequently will crystallize into natural hydroxyapatite. The hydroxyapatite will induce the osteostimulative effect by activating osteogenic cells Figure 2. 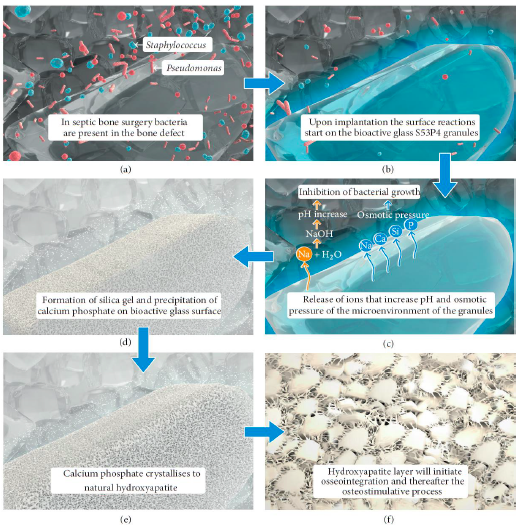 Figure 2. Schematic presentation of the mechanism of action of bioactive glass after implantation. After implantation in an infection site (a), the bioactive reaction starts (b). Ions are released from the material which causes increase of pH and osmotic pressure (c). Calcium phosphate precipitates on the silica gel that is formed on the surface (d), which thereafter crystalizes to hydroxyapatite (e). This layer starts the bioactive process (f).

In more detail the mechanism can be described as follows:

The silica network of bioactive glass is composed of bridged oxygen (BO) and non-bridged oxygen (NBO) atoms. The non-bridged oxygens contain sodium and calcium ions and phosphate is incorporated in the structure. When exposed to an aqueous environment, a reaction mechanism starts which leads to the bioactive reaction [5]. After implantation, water will enter the porous structure of the glass where it exchanges hydrogen for sodium at the NBO sites which leads to increased pH. The high local pH levels start breaking down the network due to hydrolysis of the Si-O bounds. This makes ions (Na, Ca, P) enter the surrounding fluid of the glass and elevates the osmotic pressure that, in combination with the high pH levels, has been postulated to have an anti-bacterial effect since bacteria cannot withstand these conditions [4]. Hydrolysis of the network leads to release of silanols which condensate (when leaving the high local pH environment) on the surface of the glass to form a very porous network, which recruits water and forms a solgel. This solgel is penetrable for ion exchange (surface reaction is ongoing) and the gel functions as a nucleation ground for CaP (released from the glass or present in the environment) to precipitate. The formed CaP layer thereafter crystalizes to hydroxyapatite (HA), the main mineral component of bone. This layer utilizes bone ingrowth on the surface of the glass. An illustration of the explained mechanism can be found in Figure 3.

Figure 3. Schematic overview of the antimicrobial properties and osteostimulative properties of S53P4 bioactive glass. This figure was kindly provided by BonAlive Biomaterials Ltd.

The ability of S53P4 bioactive glass to inhibit bacterial growth has been evidenced in a wide range of clinically relevant aerobic and anaerobic bacterial species through in vitro studies, and indirectly by empirical observation of patient data over the past 15 years, which shows that in those very rare situations when a patient has suffered a post-surgery infection, in no case has a material-related infection been observed.