Bone formation takes place to support mechanical forces, growth and reparative process. Bone remodeling is a process of constantly resorbing bone by osteoclasts and replace it by osteoblast. Osteocytes act as mechanosensors and instruct the osteoclast where to resorb bone, and osteoblast when and where to form new bone.1,14 Bone remodeling consists of four phases. First the activation phase, this phase involves detection of a remodeling signal due to changes in physical forces recognized by the osteocytes or damage to the bone matrix due to osteocyte apoptosis, these are signals for the osteoclast. The second phase is the resorption phase, osteoclast breaks down the bone matrix. Third is the reversal phase, the mononuclear cell removes the undigested demineralized collagen matrix in the lacunae and prepare the bone surface for bone formation. The last phase is the bone formation by osteoblast. Mechanical stimulation stimulates bone formation and inhibits bone resorption. Resting conditions inhibit bone formation. The remodeling cycle concludes when an equal amount of resorbed bone has been replaced. Remodeling are most of the time develop randomly but also occur in areas that need repair. According to the Wolff’s law, bone architecture is determined by the mechanical stress on the bone.9, 14-17

Bone is a living tissue capable of self-repair

Endochondral ossification 25 is the process by which growing cartilage is systematically replaced by bone to form long bones during growth. This process occurs at two predominant main sites in the bone: physis, epiphysis. Furthermore this process is also occurring in the cuboidal bones of the carpus and tarsus. Endochondral bone formation involves mesenchymal progenitor cells differentiating into chondrocytes. Chondrocytes are responsible for depositing a cartilaginous template that is later mineralized and replaced by bone. Chondrocytes in the physis can be divided into various layers or zones. The most distal zone (farthest from the metaphysis) is called the resting or reserve zone. Direct adjacent to this zone is the proliferative zone, in which chondrocytes divide. These cells progress further to the hypertrophic zone, in which they enlarge and form ordered columns. During this stage the chondrocytes become surrounded by extracellular matrix that gradually becomes mineralized in the zone of provisional calcification. The chondrocyte columns are supplied with angiogenesis (invasion of blood vessels) and bone forms on the residual columns of calcified cartilage. This mixture of calcified cartilage and immature bone is over time remodeled to produce the mature bone of the metaphysis. 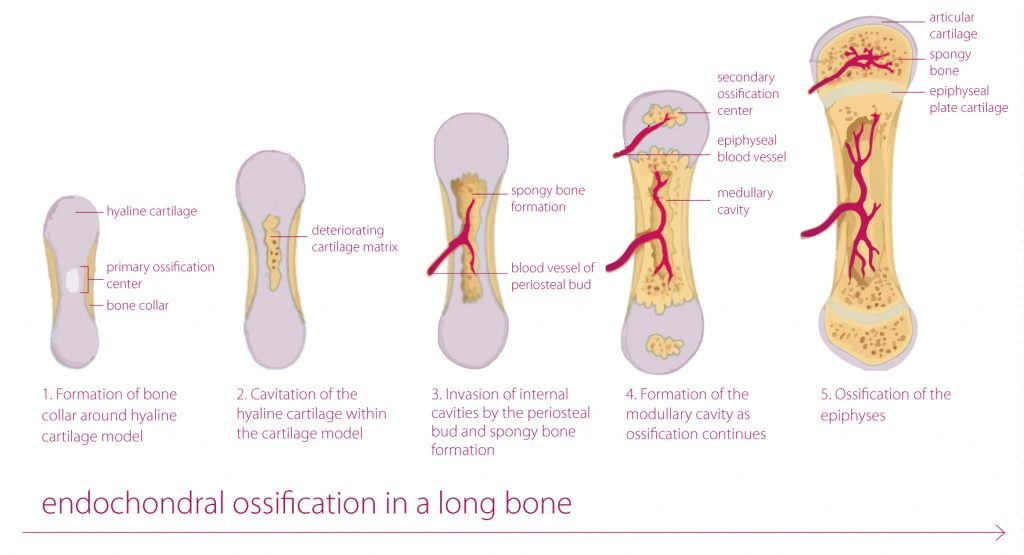 The steps in intramembranous ossification are as follows: